There’s a lot of discussion out there these days about the declining state of Aikido in the United States, to varying degrees of acceptance by the general community. Some say this decline doesn’t actually exist since they feel they’re seeing growth, others believe the decline is due to competition from “fighting” arts like MMA and UFC and BJJ, and still others because the art has just run its course and is fading out of relevance.

In the last year or so, as my other half and I dove in to collect evidence and use data-backed research to get a more concrete and clear idea of what’s going on in the world of Aikido (you may have seen stuff floating around about utilizing cohort analyses and the Aikido Journal survey) in order to figure out what the issue is, if any actually exists (hint: It does.)

But it does in a way that is both surprising and… not. It’s surprising in that despite the rise of BJJ, MMA, and UFC, the martial arts industry as a whole continues to decline, and here we are, circling the drain, pointing fingers, and squabbling over a shrinking market when what we should be doing is finding solutions. Let me give some statistics to better show you what I mean.

1. In 2013 there were 20,234 schools under Karate & Other Martial Arts Schools/Martial Arts Instruction (every business should register a “use” to the government when you incorporate/open–for example, when I started any of my real estate holdings company, I had to designate it as real estate.) In January 2016 there were 15,896 schools. There is a difference of 4,338 schools. The actual final difference (when accounting for schools that could have open within that same time difference, at 100% retention) is actually a POTENTIAL loss of 13,014 schools. Read how it was calculated here: https://martialartsteachers.com/where-did-13014-martial-arts-schools-go/

2. In 2013-2014, the martial arts industry as a whole was growing at a rate of 6.84%, while in 2018-2019, it is growing at a rate of 3.28%. That’s HALF of the growth rate it was in just a difference of 5 years. You can get some prelim demographics, industry information, and a visual graph of what that means here: https://www.ibisworld.com/industry-trends/specialized-market-research-reports/consumer-goods-services/education-providers/martial-arts-studios.html 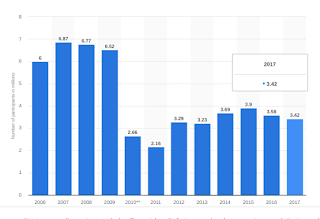 What we as a community have to realize is that even if BJJ and MMA are taking a larger piece of the market share, once they’ve reached saturation (which is the limit that the market will bear), they will, if there are no changes to the market at all, begin to circle the drain with us as well. Now the question is, why is this happening.

There are actually a few researchers out there that are starting to address this issue. Yong Jae Ko is a leading researcher in this field, and has produced several papers related to this very issue. They attribute this decline to a couple of things, including the changes in society since the 90’s from a focus of self-defense to self-improvement and enlightenment, on top of a lack of market research creating misguided/outdated marketing campaigns. There may be other variables that aren’t as easily understood or discretely polled, such as lack of time or finances and the changing family dynamics.

If you made it this far, the question is now–what can be done about it? These are just some suggestions. I don’t want to just sit here and complain, waiting for someone else to fix it for me, I want to put the power to change the situation in our own hands.

These are just some general ideas. On number 3, please think about joining our Aikido Dojo Networking chat server (https://discord.gg/qaunT6Z) where people from multiple styles and affiliations come together to figure out how to best help everyone (and has spaces to bulletin your dojo and promote seminars to everyone in the group.) Sometimes, it might be difficult to get data from our top organizations, but if individual dojos come together to provide what we have (the bigger the sample, the more reliable the results), then we can provide more accurate information. Also, we all have unique skill sets and interesting perspectives–the more minds working towards this goal of building each other up, the more likely we will have adaptable solutions that could fit everyone.