Chucking these ideas in here about preliminary research I’ve done into the general population of those who practice Aikido. The reason I’m compiling these here is because they provide a very good framework as to future types of surveys that can be done. The results give a peek as to the demographics of who practices it, and gives rise to understanding of who the market will most likely attract.

TL;DR It might be a good idea not to mis-align marketing efforts/advertising campaigns with primary motivations for practicing a martial art (which, very surprisingly, research has indicated shifting towards health and wellness rather than combat/self defense, with self defense falling behind several other motivators.) Most successful marketing campaigns make sure their marketing efforts and the primary motivations of their customers align, for example, yoga, which is growing insanely.

(An example I like to use is fishing equipment companies don’t make advertisements centered around “You will be the best fisherman in the world if you buys this product!” because while it can be a motivator, it isn’t a strong enough one that is meant to create lifelong clients. Instead, they might show a family or a group of friends having fun together, tranquility and peace in a beautiful waterscape, the excitement of fighting a big fish, etc. because those are stronger motivators.)

When I first saw these results, I was confused at the large disparity of what the general public think Aikidoka are practicing for versus what they really are training for. I was also confused because my own personal assumptions about motivation were also seemingly disproved. In finding out what the demographics are, it also allows us to come to an understanding of who we are looking to market to, and what their actual intentions are when they practice. It can shape the direction of the type of perception we hope for Aikido, and what kind of marketing campaigns would be most effective. This also gave a good foundation for the studies we wanted to run in the future.

This is all super fun information I hope you guys can find useful. Again, I’ll have some commentary sprinkled here or there.

First, here’s a link to a cool meta-analysis (which is basically a paper studying all research that’s been done on a topic) of studies that have been of Aikido and the physiological and physiological benefits. It notes limitations of the studies as well, if you have time, I would read through it. It’s a good place to point people who are curious as to the benefits of the art that’s cited properly. (Great thanks to Reddit user Platanoplata for digging it up.)

Second, the Rurh University Bochum in Germany surveyed Aikidoka on personality traits which is also worth a gander. In general, Aikidoka fall within the average range for all the values, however, men scored relatively higher in their gender on agreeableness, but slightly lower in their open-mindedness.

Finally, the Aikido subreddit ran a survey in 2015 of the general Aikido demographic (located here, although if it one day gets taken off, you can still get to it in my drive here.)

Some limitations of this survey was that there was a little more than 120 responses so the sample size is small, and of course it’s skewed towards practitioners who were active Reddit users at that time, which might have a demographic of its own.

What interested me most about the results of the last survey were this:

This next article (sorry, this will be a continuous dump as we find more information) is about the motivation of participation in martial arts. The limitations of this study that were addressed were the gender discrepancies, and my personal critiques are that it is geographically dependent and the small sample size (75 returned questionnaires.)
https://www.ncbi.nlm.nih.gov/pmc/articles/PMC3863930/
The most important take away are their three key points, which I have included with their abstract (if you didn’t want to follow the link. 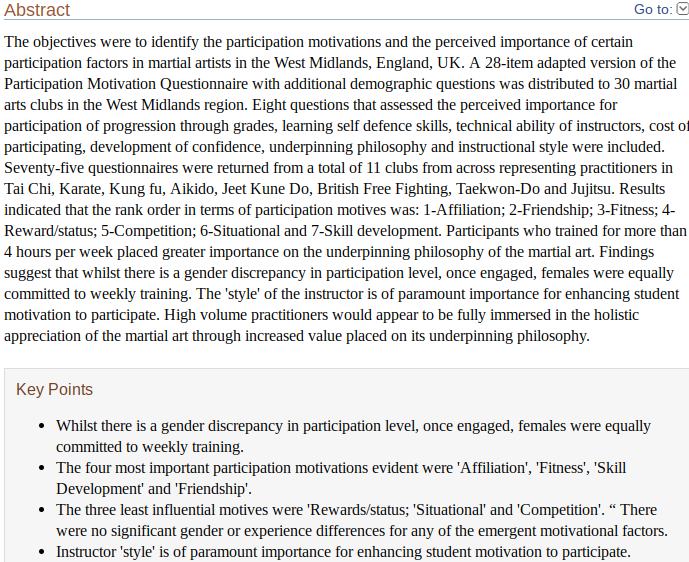 Following that, this research paper cites three more papers (Stefanek, Breese, and Zaggedilis) with similar findings–fitness, health, and friendship being the strongest motivating factors, while self defense is a motivator, it is not the main one.

“Participants in martial arts were found to have high levels of motivation in growth-related factors and aesthetics (Ko & Kim, 2010). Fun, which had been added by the researchers, was found rated as the most important factor for motivation. The researchers cited a shift in emphasis from self-defense to sport-oriented fun activities in martial arts and called for additional research to support the validity and reliability of the study (Ko & Kim, 2010). Ko and Kim’s (2010) findings of martial arts student motivations support the findings of Jones et al. (2006) and indicate a shift in perception for consumers.

Previously, the primary driver for attending martial arts classes was self-defense (Friman, 1998). Ko and Kim’s study supports the findings of researchers who have observed the martial arts business as evolving from small niche products that teach self-defense lessons, to a few students interested in exotic fighting skills, to more mainstream participative sports and professional entertainment events. These findings are a part of the first step to validate those observations and pave the way for discussions and future research about the need for martial arts business owners to adapt to new potential customer demand.”

Another interesting thing to note, at least for children, is that the theme of self-defense itself may have changed from a focus of physical confrontation to non-physical. This may be an important issue for those who are growing children’s programs.

“The implication of this theme is that self-defense is a motivator for parents to place their children in martial arts classes and that the needs around this benefit may have changed in light of evolving social practices such as zero-tolerance policies in schools.”

The 2010 Ko & Kim study cited (here), concludes “Overall, the results suggest that regardless of types of martial arts and competitionorientation, two existence factors (i.e. fun and physical fitness) and one sport-specific characteristic (i.e. aesthetics) were found to be the three most important reasons why people participate in martial arts.” They do note self defense is a motivator, but not the top motivator.

This 2015 study based on TKD practitioners found that “self defense” placed as “a medium impact factor” in at #8 of of #18 factors in terms of motivational impact scoring behind high impact factors of  technical/unique content, foster self esteem, fun/boredom relief, body shape, physical health, and other medium impact factors like teaching aspirations, and skill acquiring.

This actually reflects the survey of the Aikido Reddit community, in that situation/competition/reward-status were not the highest motivating factors.

I chased down an interesting comparison with Yoga and how the primary motivators are similar to the message Aikido tries to send (read the study here)–the abstract summarized it well. “We examined motives for adopting and maintaining yoga practice in a national survey of yoga practitioners (360 yoga students, 156 yoga teachers). Both students and teachers adopted yoga practice primarily for exercise and stress relief, but reported many other reasons, including flexibility, getting into shape, and depression/anxiety relief. Over 62 percent of students and 85 percent of teachers reported having changed their primary reason for practicing or discovering other reasons; for both, the top changed primary reason was spirituality. Findings suggest that most initiate yoga practice for exercise and stress relief, but for many, spirituality becomes their primary reason for maintaining practice.”

This next bit might be difficult to swallow, but please keep in mind that I’m not posting these two points here to get into the argument of whether or not it is effective (for some reason, everyone seems preoccupied with latching onto that and the conversation devolves into that), but what, from a business and marketing standpoint, how we are contributing to the issues that plague the Aikido community. That’s not to say it is the direction we should take, since it’s insane to change what is done based on just a few people’s criticisms, but it is something to think about.

1. Inside perception: Of the most recent personal videos people have posted of their training in the Aikido FB group, the vast majority have at least one aggressive criticism on martial effectiveness by other practitioners. A great portion also has general aggressive criticisms of how the technique is done. Why are Aikidoka so obsessed with criticizing each other in an offensive manner, rather than being able to kindly say, “Hey, thanks for sharing, it’s a scary thing to do. Can you tell me a little more about why you do it this way? I see, thanks for taking the time to respond, there’s always interesting perspectives to be learned, I was personally taught this way but can see how you could do it that way, did you ever think… etc.” There’s a huge difference between engaging in productive conversation, and one that just makes a person look like they criticize for the sake of feeling good about themselves.

I saw this comment on a post sharing the Perceptions of the Aikido community, and it provided a visible, tangible result to what would happen at the worst if how we interact with one another doesn’t change.

“I found the easiest solution was to just leave any of the Aikido related Facebook groups I was a part of. It’s looking like leaving Aikido might be an option too.”

“Thank you. I’ve decided for my own well being that it’s time to leave Aikido behind. I’ve made good friends, but the politics and bickering are a bit much.”

I hope this particular response resonated as deeply with you as it did me.

2. Outside perception: After spending quite a lot of time with different people who were vocal in their dislike of Aikido, having productive conversations and wading through a lot of noise to discern their actual issue is with Aikido (and making some friends in the process), one such person summed it up quite well:

“If Aikido billed itself as a “wellness” practice, that happens to have a few little martially useful tid bits, rather than a “martial art” that has wellness side effects, it would be much more honest with itself and its practitioners. However, as long as Aikido is going to call itself Budo/Martial Art, it better be able to hold its own against someone who really knows how to punch, kick, and grapple.”

As far as that sample demographics show, that’s exactly how most Aikidoka view their training–however, why is it that the online perception is that we are pre-occupied with effectiveness and thus earning the ire of other fighting arts? Something we should be mindful of now is that are we contributing to this discussion in a negative way, and thus to skewing this perception negatively? And if we personally aren’t, are we allowing others to speak for us thinking as long as we’re not personally doing it, it’s not our problem?

Having open, non-retaliatory discussions with those who hold negative perceptions of Aikido provides valuable insight as to what their true issue is, regardless if we agree with those perceptions. I found that once I detangled myself from the art in my conversation partner’s mind, formed a meaningful connection with them, rather than wanting to attack me AND the art, they were more likely to give measured responses because they didn’t have to resort to personal jabs, therefore getting to the true heart of what they mean when they say “Aikido is fake.” They were also more open to understanding Aikido rather than just dismissing it on the whole.

Likewise, how we engage with our fellow practitioners molds a perception of how we treat other people.

This information can then be used to shape how we want to approach marketing Aikido in the future. Is it the right one? I don’t have the answer (at least, not without doing large scale testing), but I’d just like to give some food for thought.